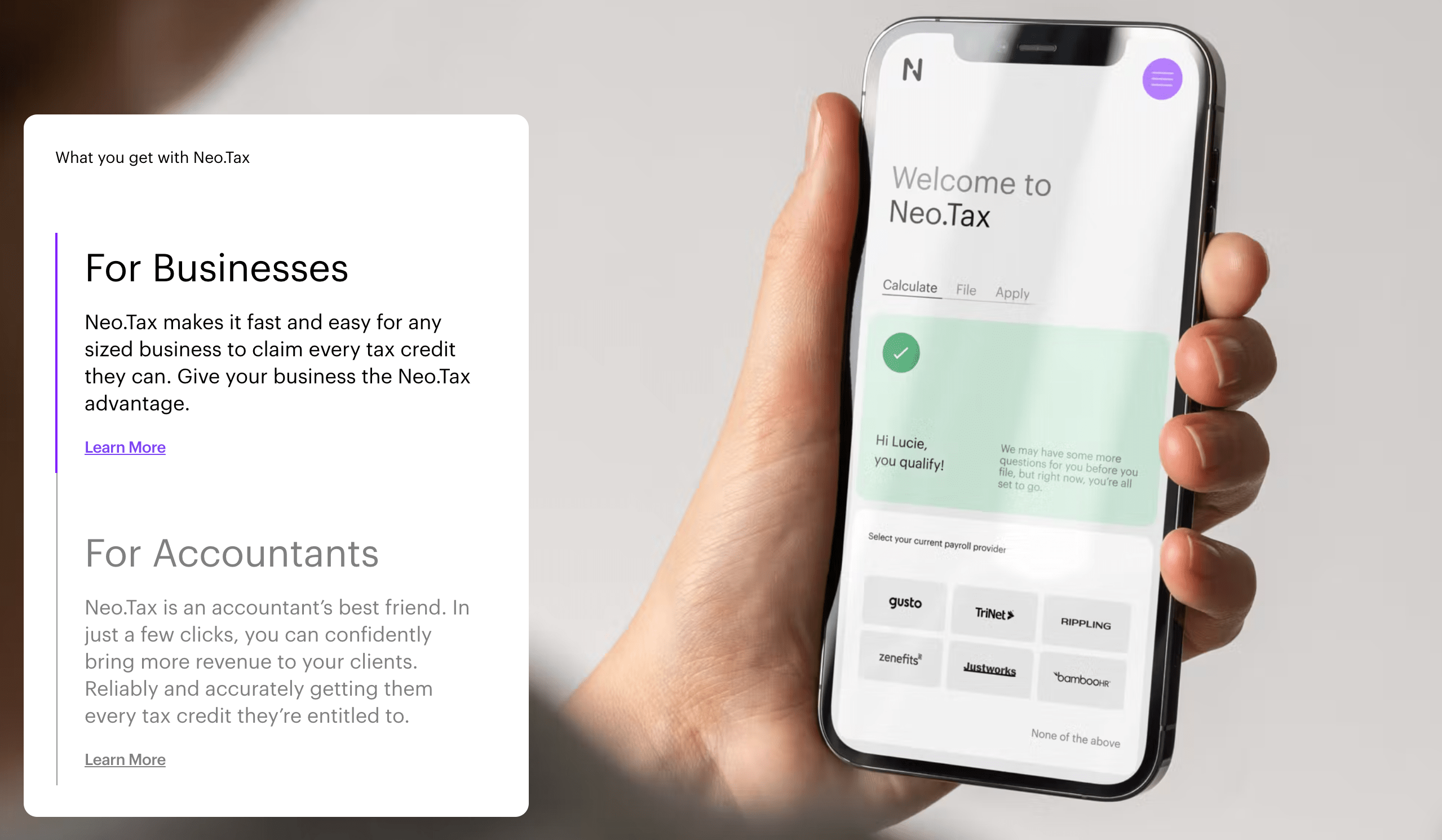 For most people, mention of the word “taxes” conjures up unpleasant things like tedious processes, mountains of paperwork and shelling out a lot of money to the government.

But one startup is on a mission to make taxes less…well, dreadful and an actual benefit. Mountain View, California-based Neo.Tax wants to apply machine learning to taxes, upgrading them “from an ancient pain into a modern advantage.” Or in other words, it wants to make  taxes more of an asset than a liability for SMBs and startups.

Its first product is designed to help such businesses to claim an IRS R&D tax credit that could result in $250,000 back in their pockets. The credits tend to be fairly easy for most software-based startups to qualify for, given the current IRS rules for what qualifies as “research.” But the process can still be daunting to some.

In line with that, Neo.Tax has teamed up with Mercury, a digital bank geared toward startups, so that fintech can offer the product to its own customers.

Or as Neo.Tax co-founder Steve Yarbrough puts it: “Neo.Tax is like having a former IRS Agent walking our customers through the process.” In addition to the technology, customers get “white-glove” support, the company adds.

The founding team behind Neo.Tax is notable in that each of the entrepreneurs have interesting — but diverse — backgrounds that are well-suited to develop this kind of software. Firas Abuzaid holds a PhD from Stanford University. The company jokes that he is automating the brain of a former IRS Agent, Stephen Yarbrough, which has been productized by a former Intuit product manager, Ibrahim.

The trio’s innovative approach has caught the attention of investors for the second time in two years. Today, Neo.Tax is announcing that it has raised $10 million in a Series A funding round led by Infinity Ventures with participation from Google Ventures, Acrew Capital and Fin Venture Capital, in addition to participation from the existing backers — Uncork Capital, Floodgate, Liquid 2 Ventures and Lux Capital. It raised a $3 million seed round in June of 2020.

Neo.Tax was incorporated in July 2019 but the founding team came together in April 2020.

“Our goal is to truly automate taxes, and through automation and intelligence turn taxes into a modern advantage for businesses,” Ibrahim said. “We are taking one of a business’ most painful problems, taxes, and not just marginally improving it, we are reinventing the entire process for companies.”

In 2021, Neo.Tax saw its revenue grow 3x and its goal is to have over 5x growth in 2022. While it has been profitable in the past, it is now more focused on growth, including adding to its team. This time last year, the company had nine employees. Today, it has 20, and is “actively” hiring across all teams.

The startup plans to also use its capital towards building “better software” and on improving its core tax automation technology. It’s also putting some money toward brand and market awareness.

Looking ahead, Neo.Tax is starting to focus more on accountants. It plans to release a product later this year that aims to take an accountant’s workflow of preparing a client’s taxes from 10-15 hours to just 10-15 minutes. It is also gearing its software toward “fintech partners” that are focused on building the modern CFO tech stack.

The company believes it is in the right place at the right time. The pandemic increased the importance of extending a business’ runway and also, a record number of companies have been formed since it began. Also, the government introduced more tax credits to help support businesses during the pandemic.

“So there was a larger opportunity to help businesses navigate this complexity — and simplify it,” said CEO Ibrahim. “Whenever the tax code gets more complex — and it’s always getting more complex — that’s a perfect job for software.”

Infinity Ventures co-founder Jay Ganatra said he was drawn to the quality of the Neo.Tax team and their vision.

“It’s rare to find a team that has all of the perfect ingredients – a PM from Quickbooks, a machine-learning PhD, and the head of tax credit audit for the IRS – to solve a very large and pressing problem,” he wrote via email. “Combine that with a clear roadmap for building a differentiated business tax platform over the next decade and the decision was easy to invest.”

His firm also “loves” that the company is very focused on embedded tax as a distribution strategy.

“With the cost of direct acquisition increasing across the board, Neo.Tax‘s ability to offer their services within platforms that already have thousands of businesses who need their product was really attractive,” Ganatra added. “This strategy can also only be applied if you can scale rapidly with your distribution partners. The ML platform that the team has built is top notch and allows for automated filings, which means that it’s just as easy for us to do ten thousand of these as it is just ten.”